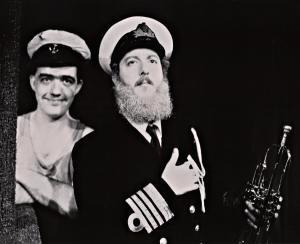 John on the "SS Graffiti" with Stoker O'Connell

John has a long history of playing original and innovative cabaret, being for many years the "King" of Cafe Graffiti - the legendary and much-missed Edinburgh venue.

When not bringing the house down with his virtuoso musicianship he could be found in comic sketches playing cruise-ship officers, cowboy badguys, cafe owners being shot by the mafia in a hail of tomato ketchup, or shipwrecked sailors serenading seagulls. 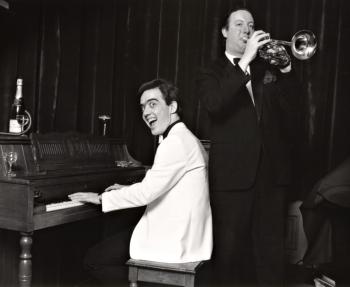 Pat and John in full flow

John has also formed a wonderful partnership stretching over many years with Pat O'Connell, his colleague from both Cafe Graffiti and the Natural Theatre Company.

They have appeared in venues across Europe, and Pat is now based in Germany. More details of their two-man show can be found at www.patandjohn.de