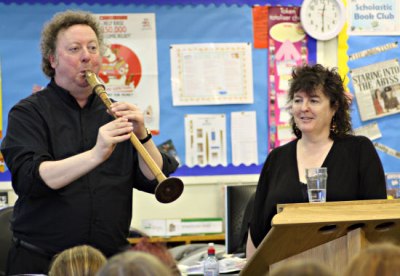 Long an admirer of poetry, John has in recent years collaborated with poets in performance, combining his atmospheric music with the recitation of the work of a number of poets.

Two of these collaborations stand out - his extremely successful work with poet laureate Carol Ann Duffy, and his performances with Stewart Conn.

With Carol Ann Duffy and her daughter Ella, John has helped to create shows such as The Princess' Blankets, which has been described as "A magical blend of poetry, music and fairytale". 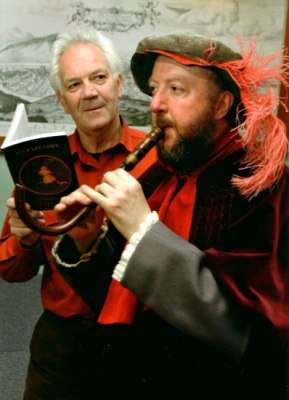 GROWING UP IN WICK

Up at the crack,
I’d be sent to the shop for milk etc-
only to find, asleep on the front-door step,
an elk. Help!

I hurried along, noticed the postman
standing at next door’s gate-
in his hand, a hake.
Surely, I thought, some mistake?
But that was what it was like, growing up,
growing up in Wick.

Down the road I went,
money to spend in my fist
and a wee list-
eggs and honey and bread-
when I saw, upside down in a hedge,
totally, udderly wedged,
a Highland cow.
What now? Was it sick? No,
that was what it was like, growing up,
growing up in Wick.

Passing my school,
where I’d played the fool
for many a year and a day, as you do,
I was scraping a stick on the railings
when I clocked, on the other side of the bars,
lions and tigers and bears.
Oh my! A zoo! An elephant! A giraffe!
Don’t laugh! My knees went week,
for that was what it was like, growing up,
growing up in Wick.

So I entered the corner shop,
where a parrot squawked on its perch
(fair enough)
to be stunned by the sight of a seal
sprawled on the sweetie shelf.
Stressed, no longer myself, in fact, freaked,
I purchased my stuff
then fled for the hills, double quick,
where I’ve watched them all far below, ever since,
growing up, growing up in Wick.