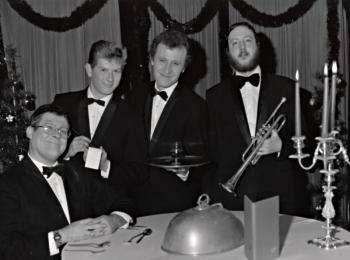 The Naturals in Eat Me

Always a man to inject a humourous tone into his music when appropriate, John found comic acting came easily to his nature. He's best known overseas for his exploits with the eccentric and brilliant Bath Natural Theatre Company, and particularly for the quartet of shows that started with Scarlatti's Birthday Party, which has run for a total of around 20 years and toured all over Europe. Playing the part of Johan Sebastian Bach gave him full rein to combine an innate flair for comedy with both his classical musicianship and his ability to switch seamlessly into other musical genres. His comic acting blossomed in this environment and he was soon able to hold an audience as well with his voice as with his instruments. 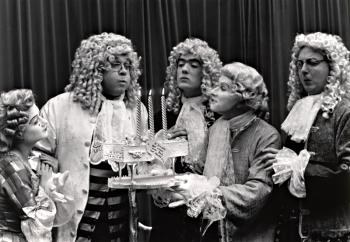 Scarlatti's Wedding furthered the process and Scarlatti's Revenge saw him not only playing a Three Tenors lookalike but also donning a dress and playing a convincing female soprano!

The most recent Scarlatti in Paradise sees him additionally as an imp, a cherub, a minstrel, a postman, and a member of the Society of Spiritualist Ladies, as the cast perform a bewildering array of costume changes.